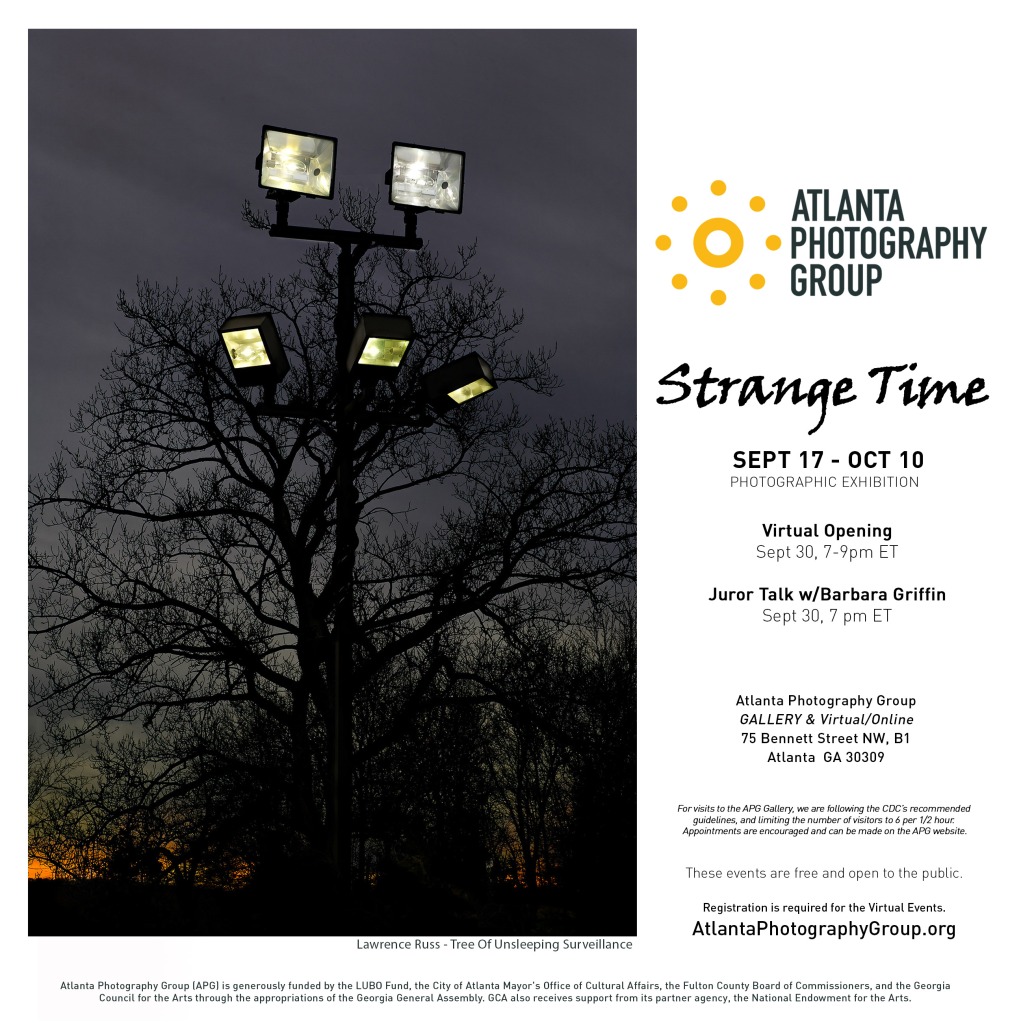 I recently had three of my photographs chosen for an exhibition called “Strange Times” at the Atlanta Photography Group Gallery .  That exhibition was conceived partly with the pandemic in mind.  Yet none of my selected images was made since the start of the pandemic, and none was generated by a dream or even a waking fantasy.

“Presence on the Twilit Lawn” and “Waiting for His Guests” were taken, respectively, on a city street and a suburban street, and the RAW files were edited only in the usual, necessary ways, for light levels, color vibrance and saturation, and sharpening.

“The Tree of Unsleeping Surveillance” was taken at a gas station on my way to work on a winter day just before dawn.  With that one, I saw that if I stood in a certain spot, the pole for the artificial lights and the trunk of a nearby tree lined up perfectly, both of them just black silhouettes at that hour, so that the branches of the tree seemed to grow from the same “trunk” as the lights.  Yes, I enhanced the effect by cloning and pasting some little branches onto parts of the lights’ metal supports and by brightening the lights a bit.  But that didn’t come from a dream; it just branched out from what I was seeing in waking (though just how awake I was at that hour is another question, given my night-owl nature).

I would understand it if someone referred to all three of those photographs as surreal.  But what would that mean?  Would that refer to some reality different from the waking, “ordinary” reality that I see walking down a street?  Or do most people need a broader and deeper view of what reality is, not just my reality, but theirs as well?

Yes, you who are artists will think of surrealism, most likely, in its art-historical sense:  A conscious movement of French poets and painters who, in the aftermath of World War I, saw the catastrophic destruction wrought by men who though that they were men of “reason,” and who turned toward the unconscious to find both what was really in men and what was missing from the kind of lives that led to World War.  They tried to make the unconscious reveal itself in part through games and exercises, like automatic writing (like what Freudian psychologists call “free association).  But the word has come to be used loosely by many people, including professional athletes and sports broadcasters (who used the word “surreal” any number of times during this year’s World Series and NBA playoffs), it means something far out of the ordinary or normal, like something you might dream, but wouldn’t see in waking life.  All too often, that thinking reflects just the conventional, confining view that people have of life, of reality.  It leads them to dismiss some of the most important things in life.  To disregard dreams and nightmares, to think that art is frivolous, to dismiss whatever intimations they’ve had about mysticism, about the ever-present role and influence of the divine.   These notions of surreality, and of what truly is real, blinds to what is most dangerous or most valuable.  Like the blind leading the blind, it leads us into ditches.

On the darker side of things, we do not see the monsters creeping up on us, or listen to those who have seen them.  And the only thing that we accomplish by failing or refusing to see those monsters is to give them the great power of invisibility.  As a child, I was struck by the scenes The Seven Voyages of Sinbad in which Sinbad had to duel with invisible, sword-wielding skeletons.  I found the same lesson later in numerous other movies:  Dracula, Invasion of the Body Snatchers, Rosemary’s Baby, Harry Potter, Mission Impossible:  Rogue Nation, — and in the events of my daily life, in the family, and in society at large.  Won’t anyone believe me?!  That’s what the film characters felt, and that’s what I’ve often felt.

It was because of people’s view of what real human nature is like, of what is normal and what is extraordinary, that we as a society and as individuals essentially ignored sexual and violent child abuse.  After all, only a monster would do such things, right?  And we’re not monsters, right?  So the voices weren’t heard, the pleas weren’t believed.  The horrors continued.  And now, as we know, or should know, such abuse is “everywhere” and common:  in churches, elementary schools, gymnastics, foster care programs, in urban and suburban homes.  It was largely ignored, though the signs were there to be seen.

And when it comes to brighter, similarly-dismissed “surrealities,” I think of Emerson’s statement that he had had, and that many of us, maybe all of us in truth have had what he called “signal” experiences.  Vivid or mysterious experiences that change our lives, or that might have changed us if we’d credited them; that give us a more exalted and fuller knowledge of what life is and what our own lives might be.  But most people are taught not only that such experiences – call them mystical or whatever you like – are not to be taken seriously, not to be taken for what they truly are.  Most people in the West have believed that people who claim to have had such experiences are either lying or deluded.  They would say, as B.F. Skinner did, that such experiences, or claims about such things as the soul or the afterlife, are not to be taken seriously, since they can’t be proven or measured through scientific methods.  Yet although such scientific evidence has been offered in the recent book Proof of Heaven, it doesn’t seem to have made much of a dent in people’s disbelief or bad behavior.

In The Gospel of John, Jesus tells a parable about a rich man in hell, who in his life would do nothing to lessen the suffering of a beggar who lay by his doorstep.  From his eternal torment, the rich man sees the beggar in heaven, lying in Abraham’s arms.  The rich man pleads to Abraham for certain mercies.  Denied the ones for himself, he asks if least he might warn his still-living brothers about the afterlife and the consequences of greed and cruel indifference.  In Christ’s story, Abraham replies that if the brothers hadn’t already heeded the clear words of the prophets, “neither will they be persuaded, though one rose from the dead.”  Did Dickens have this parable in mind when he wrote about Marley rising from the grave in order to warn his ex-partner, Scrooge, about the eventual and eternal consequences of his hard-heartedness?  Confronted with one risen from the dead to warn him, the “man of the worldly mind” replies that the ghostly messenger is no doubt just a trick of the senses, a delusion born, perhaps, from “an undigested bit of beef, . . . a fragment of an underdone potato.”  I mean, you know, it was just too surreal.

Millions and millions of people have suffered and died from the effects of staying in the shallows of what they believe is the assuredly-unsurreal real.  A central part of what I hope that some of my photographs will do is to demonstrate that the strange, the miraculous are a part of the daily real, that it is always a Strange Time if we look closely or intently enough, if we will absorb the truth that, as Hamlet said to his friend:  “[t]here are  more things in heaven and earth . . . than are dreamt of in [our] philosophy.”

And now, as a kind of closing exhibit, here is a photograph I love, not by me, but by Wynn Bullock:

Admired Photographs, Art and Spirit, Art in Society, Clues to Reality, My Photography, Society and Politics, The Spirit and Reality, Writing and Literature

Was the Alfred P. Sloan Scholar for the Humanities at the University of Michigan. Obtained a Master of the Fine Arts degree from the University of Massachusetts at Amherst, where I was selected as a Writing Fellow in Poetry by the Program faculty. Have published poems, essays and reviews in many magazines, anthologies, reference works, and other publications, including The Nation, The Iowa Review, Virginia Quarterly Review, Parabola, OMNI, and the exhibition catalogue for Art at the Edge of the Law at the Aldrich Contemporary Art Museum. Received a law degree from the University of Michigan, and have changed the law and created educational programs in the fields of arts law, historic preservation law, and public construction and contracting law in the State of Connecticut. My photographs have appeared in international, national, regional and state juried exhibitions, and have been selected for awards including Honorable Mentions in the Architecture, Fine Art (series), Nature (series), Open Theme (series), Portrait, and Seascape categories from the international Fine Art Photography Awards, and an Honorable Mention in the Fine Art-Other category from the International Photography Awards. Photographs of mine have been selected for exhibition or publications by or in the 2019 International Juried Exhibition of the Center for Photographic Art (Carmel, CA), 2019 International Competition of The Photo Review, the 2019 Open Exhibition of the Center for Fine Art Photography in Fort Collins CO, F-Stop Magazine, Shadow & Light Magazine, Black Box Gallery in Portland OR, Praxis Gallery in Minneapolis MN, the Darkroom Gallery in VT, PhotoPlace Gallery in VT, A Smith Gallery in TX, the New Britain Museum of American Art, and many other journals and venues. My work has also been selected for inclusion in the Flatfile Program of Artspace New Haven (CT). My photography website is at www.lawrenceruss.com .